Victory at Silverstone to Start the Season 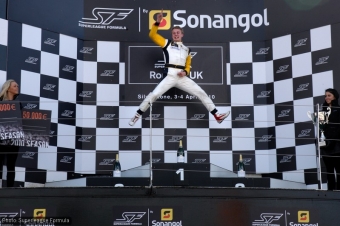 Tottenham Hotspur’s Craig Dolby marked himself out as the man to beat in this year’s Superleague Formula by Sonangol after adding a Super Final victory to his race 1 win in the opening round of the 2010 season at Silverstone.

Dolby’s display for the London club not only netted two race wins, but also the championship lead and a prize fund of €100,000 after a near-perfect weekend at the home round of both driver and club.

In the five-lap Super Final for the best six performers from the weekend’s two feature races, Dolby started on pole position but was beaten off the line by the fast-starting Alvaro Parente in the FC Porto car. Parente’s lead didn’t last long however, as a scruffy opening lap saw him go wide twice and drop to the back of the pack.

Earlier, in the reversed-grid race 2, Bourdais survived a slow pit stop to score Lyon’s first ever Superleague Formula win, making up for the disappointment of a frustrating opening race where a stall in the pits cost him the chance of a podium.

This time a sticking wheel gun during his mandatory pit stop wiped out the comfortable lead the Frenchman had pulled out in the first half of the race after passing Liverpool’s pole man James Walker at the start. He rejoined in third behind Galatasaray and Olympiacos and made short work of passing both before streaking clear to a comfortable 9.5 second victory.

The impressive Van der Drift marked his first ever Superleague Formula weekend with second place and qualification for the Super Final for Olympiacos, but Tristan Gommendy missed out on a podium for Galatasaray as he had to serve a drivethrough penalty for making his mandatory pit stop one lap before the pit window had opened.

The Frenchman’s misfortune was good news for Atletico Madrid’s Australian driver Martin, who picked up third after a strong drive from seventh on the grid.

After starting from the back of the reversed field after his race 1 victory, Dolby once again flew the flag brilliantly for Tottenham Hotspur. He made up six places on the first lap and charged through to fourth at the chequered flag to put himself top of the first Superleague Formula league table of 2010.

Liverpool made the worst possible start to their title defence as James Walker posted a second DNF of the weekend after retiring midway through the race. After spinning out of third in race 1, the Jersey driver was running strongly again in second place in race 2 when another spin saw him drop to the back of the field before pulling into the pits to retire with a mechanical problem after ten laps.