Spurs Car Up For Auction? 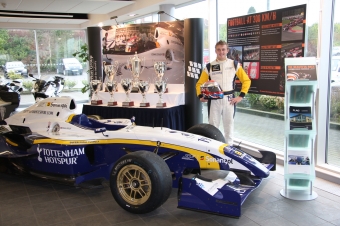 Craig Dolby proudly showed off his rather impressive collection of eight trophies that he amassed during his amazing second season in driving for Superleague Formula by Sonangol.

Craig was literally blown away by the set up of the Tottenham Hotspurs car on display at the premises of The Fleet Auction Group in Coalville, Leicestershire. The real car is on display together with some blown up images together with the TV highlights of the 2009 season that shows some pretty spectacular overtaking by the driver.

The busy car auction was buzzing with the presence of Craig kitted out in his Spurs overalls who eagerly signed autographs and took photographs with fans, as well as explaining his experience of driving with Superleague Formula by Sonangol.

The car will stay at the auctioneers until around the start of March and no is the answer to any of you thinking is the car up for auction?