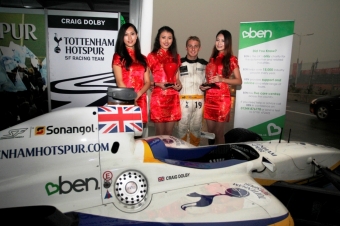 Flag sponsored motor racing sensation Craig Dolby stormed through the streets of Beijing to win the 11th round of the Formula Superleague Championship, despite never having raced on a road course before.

And the Automotive Industry charity BEN is benefiting from publicity generated by the success of Craig’s latest win.

This season the Tottenham Hotspur car has been displaying the BEN logo, courtesy of an arrangement initiated by the Leicestershire driver. Craig’s awareness of the charity and its work came through his sponsor, The Fleet Auction Group, which is an active promoter of BEN.

“This press, TV and internet publicity generated by Craig’s win is great news for BEN,” commented The Fleet Auction Group Chairman and one of Dolby’s mentors, Martin Betts. “It helps increase the awareness of the vital work that the charity does in supporting people who have worked in the automotive industry at all levels.”

At the Beijing International street circuit, Craig proved the quickest car in free practice and qualified in position two on the grid, before racing on to a comfortable victory by a clear three-second margin.

It was also the first time in the history of the championship that the race had been staged over a street circuit.

Craig and the Spurs team are now third in the Championship and, as they head into the 12th round in Spain on 23/24 October, will again be sporting the BEN logo.