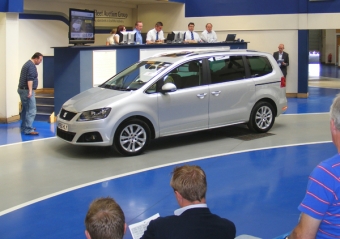 SEAT’S multi award-winning new seven-seat MPV, the Alhambra, has made its official debut in the UK’s cut-throat used car market, creating a frenzy of excitement and sending auction records tumbling in the process.

What Car? magazine’s 2011 MPV of the Year has been in huge demand in the UK since its debut here in November last year, with new car buyers keen to experience the Alhambra’s impressive mix of style, quality, practicality and value.

Recently, the first official approved used examples of the Spaniards’ flexible and attractive MPV went under the hammer in a closed auction for SEAT UK dealers at the Fleet Auction Group in Coalville, Leicestershire.

More than 25 SEAT dealers from around the country went head to head in the auction hall as hectic bidding for the ten ‘60′ plate cars available saw values soar way beyond those predicted by used car price experts CAP.

David Ardern, SEAT UK Used Car Manager, said: ‘Interest in these cars was really unprecedented, with dealers falling over themselves to get hold of one.

‘In the notoriously hard-nosed world of used car buying and selling I can’t remember a time when a number of SEAT cars have sold for so much beyond their CAP valuations. I think that tells you all you need to know about just how popular our new Alhambra is!’

Among those bidding at the Fleet Auction Group was Marc Peck of Hatfield SEAT. He said: ‘Interest in the new Alhambra is running at record levels in our showroom with a very healthy order bank for new cars.

‘Naturally, that interest is feeding through into the used car market and that’s why I was so keen to attend the SEAT UK auction.’