Honda and FLAG reach for the skies as world record beckons 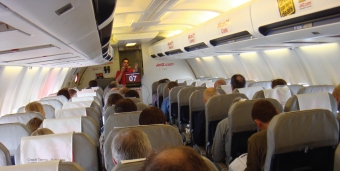 The Fleet Auction Group Ltd (FLAG) and Honda have always been highfliers, but a recent jointly organised auction proves the sky's the limit when it comes to innovative vehicle re-marketing.

The event, which saw 140 vehicles direct from Honda (UK) Used Car Department go under the hammer, looks set to take both companies into the Guinness book of Records for the world's highest auction.

In order to allow enough time for all 140 vehicles to be auctioned in the air, the plane had to take a specially designed route from East Midlands Airport to Palma. The sale commenced 15 minutes after take off, whilst climbing to its cruising altitude. Two hours later, with just minutes to spare before the plane started its approach to land at Palma airport, a 100% conversion had been achieved.

Richard Battams-Scott, Used Car Sales Manager Honda (UK) commented: "We are delighted with the outcome, especially in the current difficult trading conditions. Although it was partly a dealer incentive, the most important point was selling £1.8m of stock, at values in excess of our reserves. The dealers could view high definition pictures of the cars on PDAs we supplied and were seated in aisle seats to help FLAG's auctioneer Steve Clarke see all bids. Steve did a fantastic job, in the most unusual circumstances! The feedback from those participating has been excellent, and it was a hugely successful 'virtual auction'.

Steve Clarke added, "The months of planning that went in to this unique event provided a truly amazing experience, both for us as auctioneers and for the dealers as bidders. This is the most unusual place I have ever offered cars; at one point I thought I was going to lose my voice due to the cabin pressure."

"Even the dealers' partners and the airline crew commented how much they enjoyed the auction in this unique environment," he added. "It was truly a "Power of Dreams" moment."

The event was rounded off by a relaxing afternoon and an over night stay in Palma, with a gala dinner and local entertainment in the evening, before the flight home the next day.