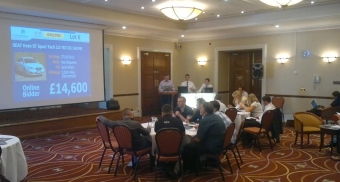 Dealers who recently attended a special SEAT UK dealer incentive day got the chance to bid for vehicles in an interactive, online closed auction using iPads.

“This was a SEAT used car auction with a difference,” commented FLAG’s Steve Clarke. “It was a two-stage, virtual auction over two days that allowed dealers to view the vehicles and bid all the way through the process.”

Attending dealers were all given a loan iPad set up with FLAG’s online bidding system, FLAGCAM, giving them the option to bid live using the iPad or in the traditional method. Also taking part in the sale via FLAGCAM were dealers back at their office locations.

35 SEAT dealers attended the sale physically using a mix of iPad and traditional bidding techniques and a further 12 dealers online joining in through FLAGCAM from their offices. Of the 130 vehicles entered, 110 were sold at an average of 103% CAP Clean.

“The dealers really enjoyed the unique environment,” Clarke said, “with a number of them alternating bids on the iPad and with the traditional raising of the hand. At one stage some dealers went out the room with their iPads and bid from other parts of the hotel just to prove it worked!”

“SEAT wanted us to bring something new and different to their remarketing programme which emulated the SEAT brand of dynamic, accessible, reliable and efficient. FLAG delivered on each and every one of those brand values.”

SEAT UK’s John Webb commented: “Dealers are used to buying cars from auction on the internet, but I felt it was time to introduce a new way of bidding in an attempt to keep the experience fresh. The dealers who attended embraced the idea and were happy to bid using the most up to date technology. Some dealers want to attend the auction physically but don’t necessarily want to be seen bidding on a particular vehicle.

“The feedback from those who took part on the day was all positive, so we will use the same technology in the future,” he added.

“As far as we are aware,” Clarke concluded, “iPads have not been used yet in the UK to take part in an interactive live online auction. Technology in our industry is moving fast and we wanted to be the first auction company in the UK to introduce the now widely popular iPad with live online technology.”