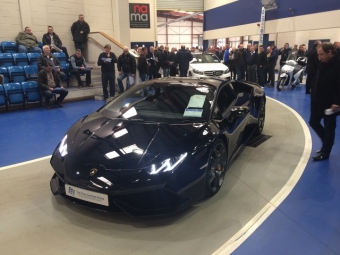 As part of the final sale in a Six Nations Rugby themed series of auctions, The Fleet Auction Group (FLAG) presented a number of supercars, including a Lamborghini Huracan. The star of the show at the final auction, the 2014 registered black Lamborghini Huracan, with just 5k miles on the clock, attracted interest and bids from dealers across the country, reached a sale price in excess of one hundred and sixty thousand pounds. The supercars, which saw a 100% conversion, were part of a total 250-lot sale at the Leicestershire based auction complex. At the end of the auction, seven limited edition, full-size rugby balls, six representing each of the participating nations and one representing the 2016 competition, were auctioned by sealed bid. FLAG CEO Andrew Walker, said 'This was a fantastic sale with 250 registered buyers visiting our site and a further 130 bidding online. It was a tremendous finale to our Six Nations themed series of auctions. It enabled us to present a cheque for five hundred pounds to former Leicester Tigers and England player Louis Deacon, on behalf of the Matt Hampson Foundation a charity very close to our hearts. In 2005, whilst the England U21 team were preparing for an under 21 Six Nations match against Scotland, Hampson was in a scrum that collapsed and dislocated his neck, severing his spinal cord. Since his accident, paralysed from the neck down and breathing via the aid of a ventilator, Matt has battled hard to live as normal a life as possible. He decided to set up the Foundation so that others who have suffered similar catastrophic injuries through sport can receive support and assistance. Details of the aims and work done by the Foundation can be found at http://matthampsonfoundation.org/ If you would like to be included on our mailing list for future supercar auctions please contact andrew.walker@fleetauctiongroup.com