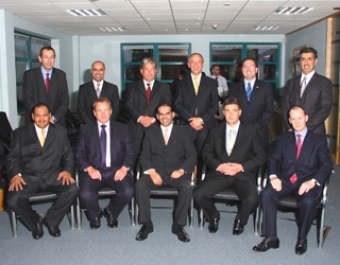 In a dramatic double announcement, The Fleet Auction Group Ltd (FLAG) has outlined details of a major partnership with a Kuwait consortium, Ijara House Holding Company.

The mulit-million pound joint venture will see FLAG enter the Middle East when the first official Remarketing Centre is opened in Kuwait.

Negotiations for further centres are currently underway with other Middle East Countries including The Kingdom of Saudi Arabia and The United Arab Emirates.

Ijara House Holding Company, a consortium of four leading Kuwait businesses with a combined asset value in excess of US$11 billion, is headed by CEO and Chairman Jamal Homoud Al-Omani, regarded as one of the leading experts in the Middle East motor industry.

FLAG CEO Andrew Walker said, "This is an incredibly exciting time, not just for The Fleet Auction Group and its UK fleet vendors and trade buyers, but for the remarketing industry as a whole. It represents the coming together of two dynamic organisations with the shared vision of creating an imaginative and vibrant remarketing group with the skill base that will challenge the status quo on the global stage. All this takes passion, expertise and of course funding: our new partnership has these vital ingredients."

As well as the introduction of some ground-breaking industry initiatives, Walker also believes that, in the future, the arrangement will also offer FLAG's UK customers additional benefits, opening up new commercial opportunities.

Both CEOs, who first met eight years ago, will now concentrate efforts on the expansion of the Group both organically and through acquisition, thereby quickly extending FLAG's long awaited physical presence into other parts of the UK. A number of locations have already been identified and a number of acquisitions have been targeted.

Ijara House Holding Company CEO and Chairman Jamal Homoud Al-Omani co The FLAG board of directors will maintain control of the UK operation, and will be providing operational and skill-based consultation for the Middle East remarketing centres. Walker added, "It is day-to-day business as usual for FLAG's fleet vendors and trade buyers, they will still be dealing with the same FLAG staff, and will continue to receive the same high level of service that has become synonymous with the Group's name." mmented "I have been fortunate enough to see the formation of The Fleet Auction Group, watched it being built and have witnessed its meteoric growth through the team's passion and professionalism; we could not ask for a more suitable partner."

An indication of the significance of the internal motor industry in Kuwait is its growth rate compared with that of its population. At the end of 2006 there were approximately 1.2 million vehicles in the country with a population of around 2.9 million. The annual population growth is 3.56% while the number of vehicles is increasing at over double that rate, at 7.8%. Japanese manufacturers account for nearly half the countries vehicles, with European and US models taking 11% and 16% respectively.